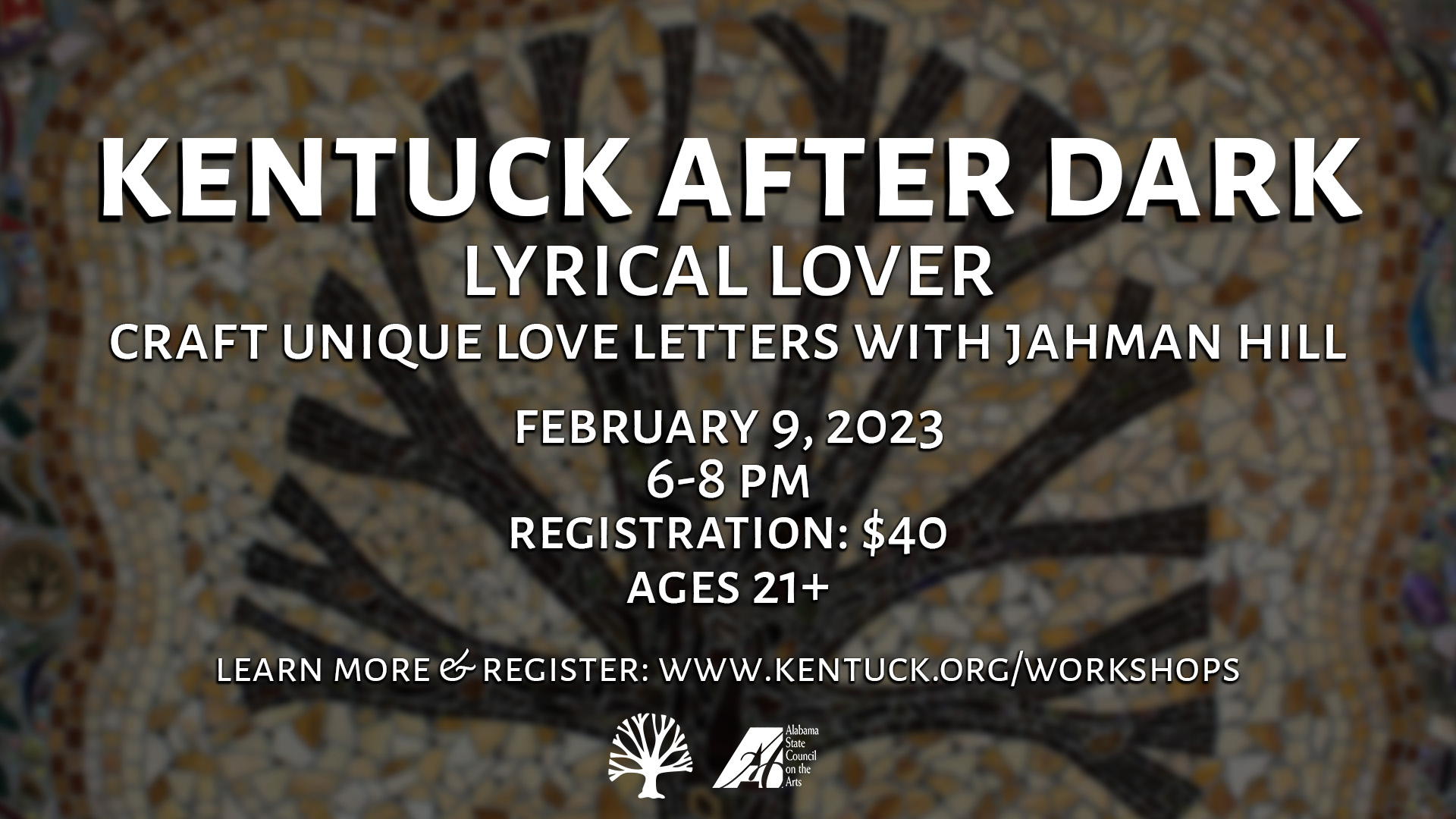 event
Dates
Feb 09 6:00 pm - Feb 09 8:00 pm(GMT-06:00) Central Time (US & Canada)
location_on
Location
1922 5th Street, Northport, Alabama 35476, United States
Looking for a night out? Join Kentuck on February 9, 2023 for a special night crafting the perfect Valentine for your someone special. Participants will be guided by Jahman Hill, Executive Director of The Flourish Alabama, in writing a one-of-a-kind love letter for the subject of your choice—your sweetheart, your bestie, or just you! We will utilize metaphor, imagery, and allusion to craft unique love letters. Participants will also be given access to variety of media to create a card to hold their love letter. Your ticket to Kentuck After Dark includes all instruction, materials, two drinks (wine or our specialty cocktail), and light hors d’oeurves. Kentuck After Dark is a 21+ event. The minimum for this event is 12 participants, and the maximum is 20. If this event does not meet the minimum, participants will be refunded About Jahman Hill: Jahman Hill is an award winning poet, playwright, and professor. In 2018, Jahman claimed the title of 3rd best slam poet in the world, and in 2019 he wrote, produced, and starred in an award-winning one-man show, Black Enough, which played off-Broadway. Jahman Hill has become a sought after poet internationally. His poetry videos have garnered millions of views online. Jahman is a professor at the University of Alabama where he received Master’s degrees in both Communication Studies and Women’s Studies. The core of Jahman's creative work centers around “The Flourish”, or the idea that Black people are infinitely possible beings.  This event is made possible in part by a grant from Alabama State Council on the Arts.
Show more >
Parking instructions
This class will be held in our Georgine Clarke building at 1922 5th Street, Northport, AL 35476. The entrance is on 5th Street across from the Anders Hardware parking lot. Look for red sculptures out front and glass doors! There is a parking lot next to this building, and participants are also welcome to park in Downtown Northport.
Show more > 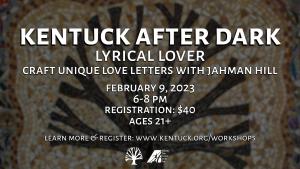 Registration for Kentuck After Dark: February 9
$40.00 / each
+$2.67 FEES
1 day left
Non-refundable
Select
Thank you for registering! If you are Ken-Folk (a member of Kentuck) of the Museum level or higher, please give us a call at 205-758-1257 during Kentuck’s hours to receive your discounted... + More

Please check in using the tickets or confirmation code below. If you do not have a ticket, you can get ticket here: https://www.eventeny.com/events/ticket/?id=4832