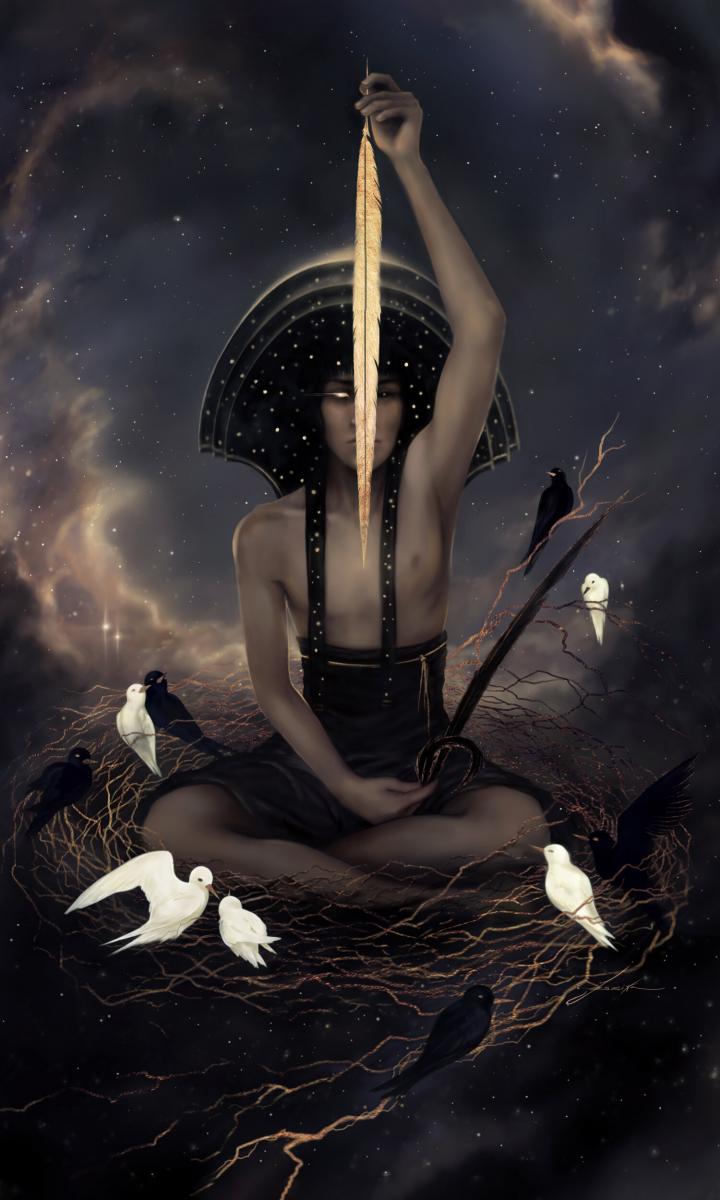 The Hierophant is he who brings the spiritual to the material world. He is an authority in the sacred, the moral, the existential, and his path is one of discipline, order, and tradition - the sharing of exoteric knowledge. A spiritual shepherd, he is crowned with the vast expanse of wisdom gained. His three-tiered crown represents the three realms - conscious, subconscious, and superconscious and is adorned with the light of stars, representing a purity of thought and gleaming, piercing insight. His spirituality is not flippant but studied; it is arduously pursued even in the face of opposition. Wielding great power, the Hierophant must be ever mindful against tyranny. Revelling in structure, there’s a danger to groupthink if acolytes grow uncritical of their beliefs. On the shadow side, he speaks to the dangers of conformity and dogma, the twisting of group identities that should strengthen us rather than diminish us. The Hierophant combines our natural curiosity to seek out meaning and knowledge with structures and community. Around him, the birds gather, a flocking of individuals seeking wisdom and ascension. Birds, a symbol of our cognitive functions, reach into the heavens linking the mundane earth below with higher realms of ideas, thoughts and intellectual pursuits, and the nature of thought itself. They know that thoughts shape their inner and outer realities - reminding us that our thoughts design how we feel, how we act. He holds in his hands beautiful feathers. Like crossed keys, these symbolize wisdom - knowledge that unlocks power. They are keys to heaven, the realm of higher consciousness, and keys even to understanding hell, the realm of unconscious and instinctual life. In one hand he holds a golden feather upraised, an elevated wisdom - in his lower hand black feathers, gilded with coppery earthly insight. The dichotomous feathers symbolize the balance between the ideal and the mundane, the higher thought and the subconscious, the inner and outer realities. They are keys to raising up and elevating oneself, to unlocking the sacred place within. The Hierophant gathers round him a nest, a refuge from the meaningless, animal world - available to any who seeks its shelter - assuring us that we don’t have to seek alone, to reinvent truths that past teachings have gathered for us. There is insight that has stood the test of time and you can be supported by the beautiful structure of it. There are cathedrals of wisdom, and teachers who have flown ahead on the path. The solidity of cathedrals offer shelter in structures built to be larger than our lifetimes. The branches of the nest, shaped like crackling lightning encircle him. A sharp bolt of a branch arches out behind him - a spark of enlightenment, a catalyst to growth. The flash of insight, of the divine order, strikes but a few times in a single lifetime. So he harnesses the lightning, taking fleeting moments of deep revelation and organizes them into a usable structure - philosophies and traditions that deepen, recreate, and allow us to interact with those experiences in a meaningful way. The organization and structure allow us to gather those keys and share them with others who wish to learn, to support not only our own but our community’s growth. The Hierophant is diligent, not only to those who turn to him for insight, but to the nature of truth itself - presenting it unflinchingly. His gaze is direct and unyielding. Yet we gaze back. At eye level with him, we are raised to the higher realms to receive his wisdom and teachings. He sits tranquil, among the pillars of heaven, and behind him, there is no veil to conceal the mysteries. Behind him, the expanse of space stretches as far as the eye can see - knowledge that is freely disseminated. He is the divine messenger between the higher realms and the earthly. He will remain there for as long as mortality allows until he passes the keys of wisdom to a pupil who accepts the legacy entrusted to him. Upright - the card symbolizes: Moral Authority, Tradition, Insight, Spiritual Teachings, Ideals, Growth, Discipline, and Structure Reversed - the card symbolizes: Blind Faith, Dogma, Rebellion, Inertia, Ignorance, Base Instinct, Unconventionality, and Atrophy

No refund or returns allowed on this purchase.
Exceptions may apply. Please message Jeszika for more information. 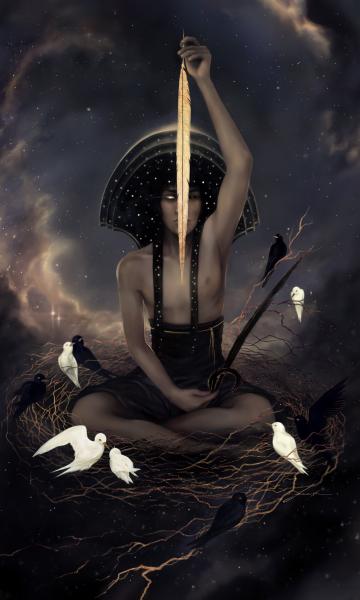 Check out other items by Jeszika Le Vye 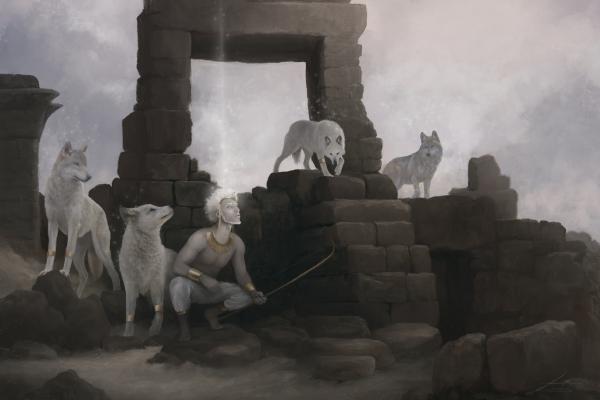 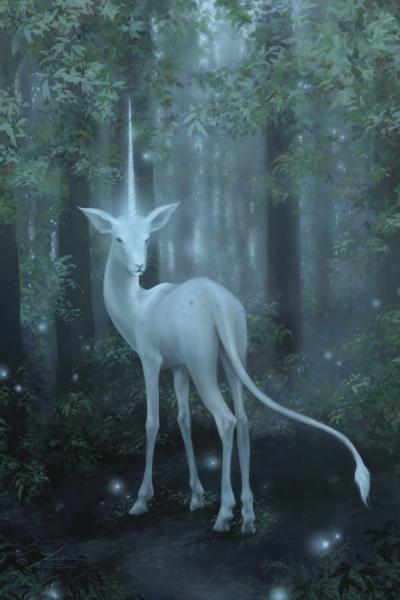 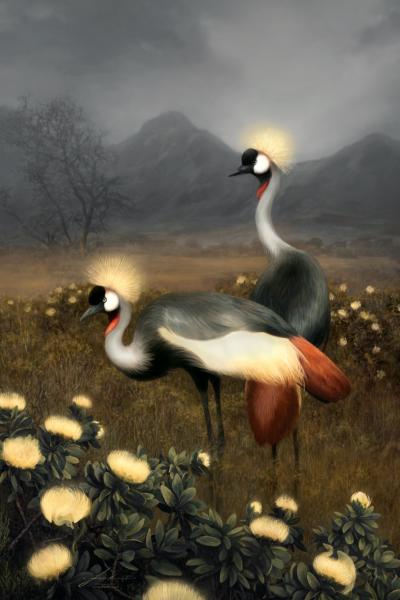 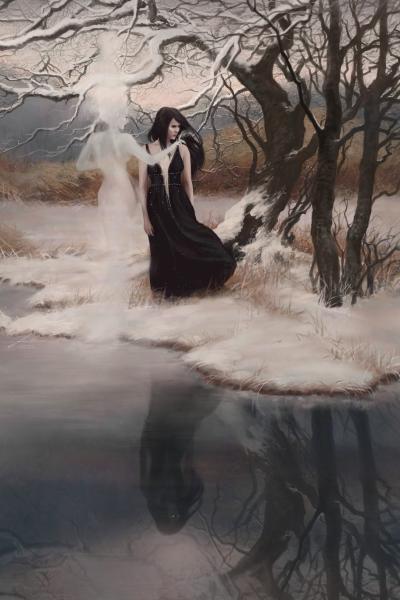 Please confirm your choice below and add The Hierophant - Tarot - Major Arcana 5 to the cart.